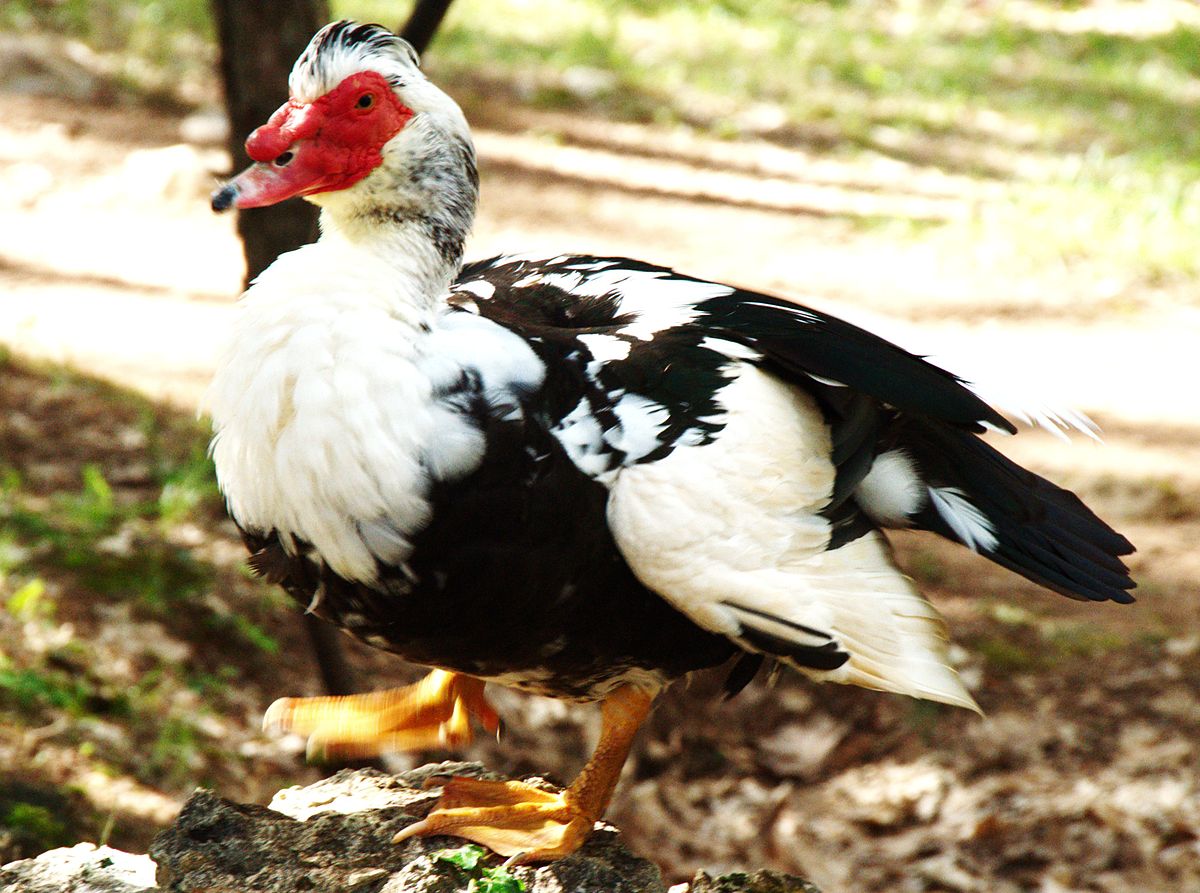 The Muscovy duck (Cairina moschata) is a large duck native to Mexico and Central and South America. Small wild and feral breeding populations have established themselves in the United States, particularly in Florida, Louisiana, Massachusetts, and the lower Rio Grande Valley of Texas, the big island of Hawaii, as well as in many other parts of North America, including southern Canada. Feral Muscovy ducks are found in New Zealand, Australia, and in parts of Europe.

It is a large duck, with the males about 76 cm (30 in) long, and weighing up to 7 kg (15 lb). Females are considerably smaller, and only grow to 3 kg (6.6 lb), roughly half the males’ size. The bird is predominantly black and white, with the back feathers being iridescent and glossy in males, while the females are more drab. The amount of white on the neck and head is variable, as well as the bill, which can be yellow, pink, black, or any mixture of these. It may have white patches or bars on the wings, which become more noticeable during flight. Both sexes have pink or red wattles around the bill, those of the male being larger and more brightly colored.

Although the Muscovy duck is a tropical bird, it adapts well to cooler climates, thriving in weather as cold as −12 °C (10 °F) and able to survive even colder conditions. In general, Barbary duck is the term used for C. moschata in a culinary context.

The domestic breed, Cairina moschata domestica, is commonly known in Spanish as the pato criollo. They have been bred since pre-Columbian times by Native Americans and are heavier and less able to fly long distances than the wild subspecies. Their plumage color is also more variable. Other names for the domestic breed in Spanish are pato casero (“backyard duck”) and pato mudo (“mute duck”).

The true wild Muscovy duck, from which all domesticated Muscovies originated, is blackish, with large white wing patches. Length can range from 66 to 84 cm (26 to 33 in), wingspan from 137 to 152 cm (54 to 60 in) and weight from 1.1 to 4.1 kg (2.4 to 9.0 lb). On the head, the wild male has a short crest on the nape. The bill is black with a speckling of pale pink. A blackish or dark red knob can be seen at the bill base, which is similar in colour to the bare skin of the face. The eyes are yellowish-brown. The legs and webbed feet are blackish. The wild female is similar in plumage, but much smaller, with a feathered face and lacking the prominent knob. The juvenile is duller overall, with little or no white on the upperwing.

Domesticated birds may look similar; most are dark brown or black mixed with white, particularly on the head. Other colors such as lavender or all-white are also seen. Both sexes have a nude black-and-red or all-red face; the drake also has pronounced caruncles at the base of the bill and a low erectile crest of feathers. C. moschata ducklings are mostly yellow with buff-brown markings on the tail and wings. For a while after hatching, juveniles lack the distinctive wattles associated with adult individuals, and resemble the offspring of various other ducks such as mallards. Some domesticated ducklings have a dark head and blue eyes, others a light brown crown and dark markings on their nape. They are agile and speedy precocial birds.

The drake has a low breathy call, and the hen a quiet trilling coo.

Male Muscovy ducks have helical penises that become erect to 19 cm (7 in) in 0.3 s. Females have vaginas that coil in the opposite direction that appear to have evolved to limit forced copulation by males.